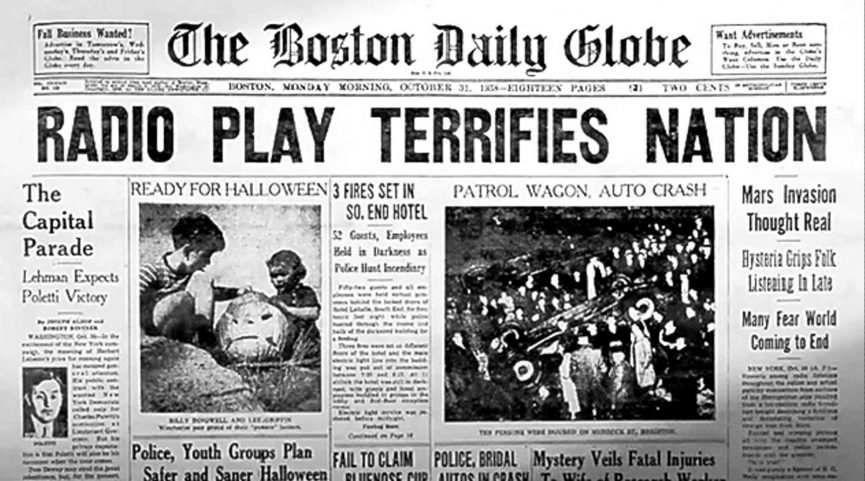 Interestingly enough as part of the Abridged 0 – 2: Damaged Collateral project (which also consisted of a magazine and exhibition) we produced a stage performance of Orson Welles’s War of the Worlds. Appropriately at the very end the (fire) alarm started up. It was someone smoking in the hallway but we always maintained we had planned it.

I suppose in one way Well’s broadcast is ‘Fake News’. In an age of (comparatively) innocent listeners who mostly trusted their broadcasters there would always be a few that would mistake the broadcast for ‘real’ news. Nowadays it takes effort to believe the unbelievable. And what I mean by effort is the cultivation of a deliberate disregard for the plainly ridiculous that goes way beyond being taken in the excesses of propaganda.

For example Edgar Maddison Welch, 28 of Salisbury, North Carolina, walked into the front door of Comet Ping Pong and pointed a firearm in the direction of a restaurant employee, T​he Washington Post reported. He believed that the Pizza Shop was at the centre of a child sex ring at the heart of which was Hillary Clinton and her advisers. It didn’t matter that this was all created by internet far-right trolls. Welch and people like him wanted to believe it.

Of course the object of creating rumours like this is not (for the most part) to get the maximum amount of people to believe them. In fact very few will except those like Welch, determined to whatever evidence to the contrary. The object is to muddy the water so that whatever ‘truth’ there is can be obscured in a flood of innuendo and misinformation with the result that people become cynical enough to be disenfranchised from facts that they will go along with anything that appeals to their emotions. Conspiracy theories  are the oil which the alt:right and the hard left thrive on. It used to be dangerous enough whilst it hid in the shadows. Now it hides in plain sight.

Here’s an article about the War of the Worlds scare: http://www.vanityfair.com/culture/2015/04/broadcast-hysteria-orson-welles-war-of-the-worlds