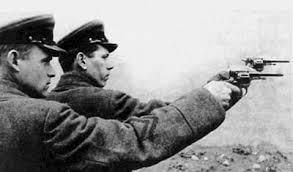 In the midst of an essay based upon an Anthrax outbreak from Compound 19, a military chemical factory in the Soviet city of Sverdlovsk, now known as Ekaterinburg in 1979. Officially the explanation was that the Anthrax outbreak occurred from a batch of tainted meat. The world has always had issues with truth. In Soviet Russia a truth was of little issue in the face of THE TRUTH. An indication of this (literally) came to light in 1979 when the River Ob flooded its banks in the Siberian town of Kolpashevo. The bodies of thousands of victims of Stalin’s Secret Police were uncovered, some, preserved by the permafrost still recognisable to older local people.

I suppose Abridged has always been interested in those exact little moments when idealism changes to something else and when a decision is made that changes the Universe. As the New York Times asks:

after what point in history did the worst of the tragedy — the famines, the mass executions, the gulag — become inevitable? The October Revolution? Stalin’s selection as Communist Party secretary? One can ask the same question about a person’s life. For [local Secret Police caommander] Stepan Marton, doctor turned executioner, what was his point of no return? As a prisoner of war in a senseless, bloody conflict between two dying empires, Marton must have felt himself to be a victim. But at what point did he become a persecutor instead?

That moment when the world cracks and there’s no going back. Perhaps as the saying goes people eventually become the person they always are…

At any rate as a tangent to the essay (which you’ll be able to read in the not too distance) here’s a report on the Kolpashevo incident from the New York Times: http://www.nytimes.com/1993/03/28/magazine/the-secret-of-a-siberian-river-bank.html?pagewanted=all