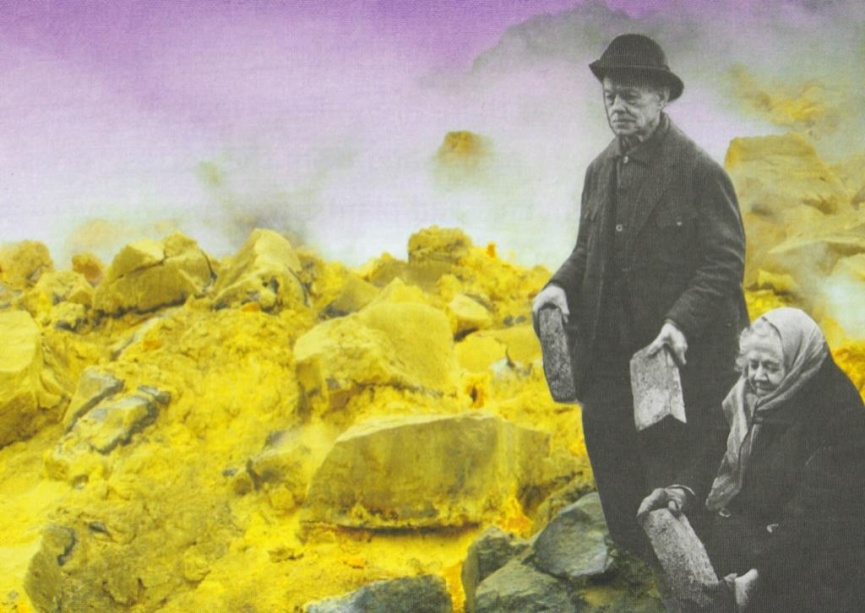 We come together in touch. This is contagion. Infection spreads with close contact. We are intimate with the-end-of-things. Because the-end-of-things eats in tiny pieces secretly, in what we drink and eat and live and need. It gets inside. Contagion engenders a paradox. It is the shadow-sister of absolute closeness, the closeness that is everything we yearn for and everything we fear, conjuring our absolute desire and absolute repulsion. Contagion is our network and our death drive, our meaning and our loss. We want more than anything to be near enough to other people – to another person – to constitute them, to make ourselves out of them, to dissolve our vulnerabilities along with the boundaries that define us and make us alone in the world. But we are equally terrified of such a suicide. We love into contagion madly. We lose. We despair. We craze. We perpetrate. We perpetuate. We are involved. We are blind. It wraps our senses. It is sticky on our fingers. Together we present the symptoms of our own condition, but there on our surface, on the puckering skin of us and our loved ones, we do not recognise them as something of ourselves. Believing in our unity, in our “I,” we are threatened, overwhelmed, by the multiplicity of contagion; by its being inside us, by its pouring between us slippery like words, by its blurring the edges between us like a festering. It is other and it is ours, and we are it, together, although knowing this might makes us hysterical. What we have pushed down as inexplicable leaps out into the world as something strange, and we recoil.

Contagion is never constituted as a singularity. It must be moving, it must possess, straddle, multiply, in order to exist. And so we can never be sure of it. It is invisible but for a nauseating warping, but for uncanny flashes that stop us into panic. It makes everything uncertain as we are caught in the flood of it, up to our eyelids where it pools over our sight. So easily uncertainty twists into conspiracy. With plague comes suspicion, comes isolation, comes hysteria, comes total destruction. We speak contagion, not words of our own. There is no immunity, and no safety in hermetically singular selves because there are no such things. We are volatile, flowing in and out of others, of open individuals, of crowds, making brutal bodies for contagion, ecstatically, fulfilling and then emptying. Contagion is quick as a flame thrown into a river of petrol. But it doesn’t burn out with the blaze: it eats through into the dark and on and on, feeding and eating and emptying and growing, heavy as a war.

And there is more: fear of contagion breeds more vicious contagions. Fear itself is contagious, and fatally so. That is, fear of a mutation, a difference that presents, and a presentation that spreads with new confidences, new willingness to manifest the underlying, these that seem to burgeon in situations of vigorous togetherness. Those who are different are surely threats, those similar surely competition. Suspicion plants its roots deep and spores. Trust nobody. You’re up against a rip-tide of bodies, everybody else, their worming mutability. You are too full of holes – holes like hunger and blindness and pity and fear. You are porous. Contagion streams in. To be anti-body would be to deny ourselves. Our defences are corruptible, childish, insecure as our wants. Survival would be immunity to touch. But contagion, it seems, is living.