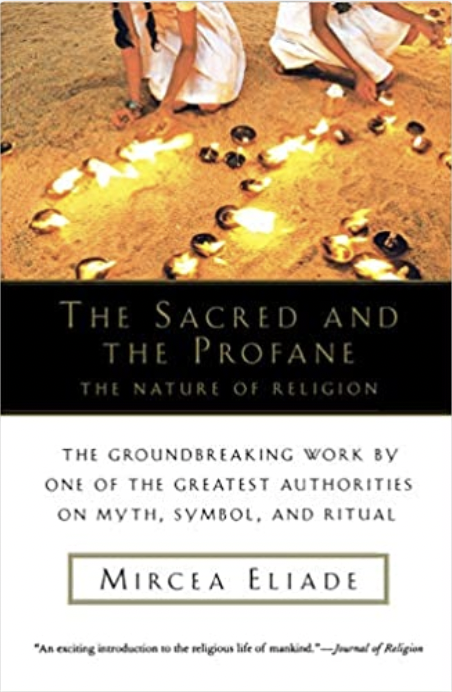 ‘The majority of the ‘irreligious’ still behave religiously, even though they are not aware of the fact’ (104). This is something of a side note in Mircea Eliade’s The Sacred and the Profane, but really the point made here is what gives its observations standing importance, especially from the perspective of the Abridged project. Human beings are world-making beings. ‘Sacred’ orientations and behaviour in relation to place and time and world and others persist in predominantly ‘profane’/secular dimensions of society in ways most of us aren’t conscious of. Understanding these and their roots deep and wide human history is an important part of illuminating tendencies and key (shared) questions in our contemporary behaviour and motivations (fears and desires), which is a significant part of what we try to make room for in Abridged activity.

Eliade here is concerned with the attitudes and orientations of the ‘religious man’ in general, as an archetype across world religions. The character of this ‘religious man’ is difficult to find clearly defined in contemporary society. Rather it often seems muddled; aspects of various religions have become ‘desacralized’, and certain ‘secular’ activities have often become effectively ‘sacred’, whether we have noticed or not. Eliade’s focus (though the generalisation has apparently been met with some criticism) is on patterns and consistencies across religions (that is, across early human groups/societies, invariably unified by some sort of ‘religion’). As such, the book adds texture for anyone building a picture of what might be termed ‘human nature’, something shared that is at the root of religious (and secular) behaviour and orientation.

Religion is acknowledged here as a ‘mode of being’ in the world that is built into our humanity, whether or not it becomes displaced into other dimensions of our lives. It is tied up with our need to feel secure, placed, in touch with something other than our own mortality, the need to ‘fix a centre of the world’ for ourselves (22). This haunts so much of human life: art, patriotism, entertainment, politics, consumerism, family… all manner of ideological and quotidian systems (/languages) via which we live. Eliade points to the many manifestations of ‘sacred’ space and time as our way of creating order in opposition to chaos. (‘… religious man feels the need to always exist in a total and organised world, in a cosmos’ (44); ‘An unknown, foreign, and unoccupied territory (which often means, ‘unoccupied by out people’) still shares in the fluid and larval modality of chaos. (31)). Still, terrified of chaos, unable to ‘be’ in it, we contemporary and largely ‘secular’ beings look for a pattern to live by. Still we fear the ‘chaos’ of the unknown.

Eliade says that for religious man the existence of the world ‘wants to say’ something (165), he ‘finds a cipher everywhere’ (183). And we still, however we identify, want to ‘read’ something from it. (This is perhaps most cartoonishly obvious in the power of conspiracy theories, but is pretty ubiquitous – we are pattern seekers). Blinkered subscription to individual religions and their doctrines and oppositions, fear of what lies beyond their ‘world’, has caused and continues to cause enormous problems in terms of human relations. But the significance and implications of the ‘religious’ as ‘mode’ or (to use again my chosen word) orientation in the history of humanity, and its persistence, echoes and displacements up to the present day, go far beyond this limited manifestation… Abridged is necessarily interested in the ‘religious’ and its refractions, that is with myth, shared story telling, patterns and meaning, the numinous and, of course, fear.

There is much more to note from this little 1950s book that will have to wait until another time, or manifest elsewhere. I have dipped into it before as a student on a recommendation from a tutor for which I’m very grateful, and it was inevitably stimulating to revisit at this strange time of a globally shared and terrifying human experience. Usefully outlining the recurrence of a few key images across many religions/mythologies (axis mundi, imago mundi, immersion, new year, belly of the monster, etc.) that will do doubt make their way into future Abridged editorials, there is also much to mull here in terms of the questions I find myself asking about the possible echoes or absences of ‘sacred’ orientations in the world of 2020/2021…

More reading from the Winter…

Strangers: Essays on the Human and Non-Human by Rebecca Tamás (Makina Books, 2020)

Feline Philosophy: Cats and the Meaning of Life by John Gray (Penguin, 2020)

A Short History of Myth by Karen Armstrong (Cannongate, 2005)

The Dominion of the Dead by Robert Pogue Harrison (University of Chicago Press, 2003)

Creation Myths: Man’s Introduction to the World by David Maclagan (Thames and Hudson, 1977)